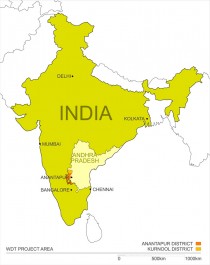 Ananthapuram is the southern-most district of the Rayalaseema region located towards west of Andhra Pradesh State in India. It is in the arid agro-ecological zone and is marked by hot arid bioclimatic conditions with dry summers and mild winters.

The geographical location of Ananthapuram District is such that it doesn’t get the full benefit of either south-west monsoons or north east monsoons.

It is in the rain shadow region receiving an annual rainfall of 522 mm the second lowest in India and is one of the poorest districts in the country. Recurring droughts is a common phenomenon in this district which was one of the thirty one districts identified by the Government of India as being prone to agriculture related suicides in 2006. . It is also one of the 17 districts identified as centres for human trafficking in A.P. 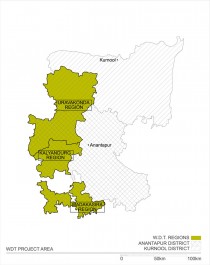 Both literacy among male (74.09%) and female (54.31%) in Ananthapuram district are also lower than the AP State and National average. The district is divided into 63 Revenue Mandals now called Taluks spread across 3-Revenue Divisions namely Ananthapuram (20 Taluks), Dharmavaram (17 Taluks) and Penukonda Divisions (26 Taluks). There are 929 inhabited Revenue Villages and 3360 hamlets in the district as per 2001 census.

There are no other dependable sources of livelihood except Agriculture which plays an important role in the economy of the District. About 70 % of population depends on Agriculture for their livelihood.

Of the total geographical area of 19.13 lakh hectares, the total net area sown as per 2008-09 statistics was 10.82 lakh hectares (56.61%). The district occupies the lowest position in respect of irrigation facilities with only 1.45 lakh hectares (14.08%) of gross irrigated area, that too mostly through undependable tube wells and tanks.

Farmers in chronic drought prone Ananthapuram district largely depending on rain-fed farming mostly grow groundnut as mono crop which often fails due to continuous failure of rains and attack of pests and diseases. With virtually poor industrial base, backwardness and poverty of Ananthapuram district are well indicated in its severe rural indebtedness, distress sale of assets, high seasonal migration, low literacy levels, rapid depletion of underground water resources, highest number of farmer’s suicides in the country and trafficking of women in some areas of the district.

The impact of recurring droughts triggers desertification ultimately manifesting itself into extreme poverty conditions and deteriorating eco-systems seriously affecting livelihoods. All these cause undue hardships to deprived and marginalized sections viz., Daliths, Tribes, Backward Castes, Persons with Disability and Women.   Ananthapuram was considered the neediest district by the organization in 1969 for its developmental work keeping in view the gravity of the above circumstances.

Kurnool is the gateway to Rayalaseema Region and is the third largest district of Andhra Pradesh State. It has a geographical area of 17658 Sq Km with a density of population of 229 per sq Km.

The main crops raised are paddy, groundnut, jowar, cotton, bajra, tobacco and sugarcane. The crops like paddy, sugarcane and groundnut are cultivated in canal ayacut areas. Under well irrigation, crops like groundnut, onions, chillies and vegetables are grown. The mean annual rainfall of the district is 670 mm. Only 23% of land has irrigation facilities, the rest depending on precarious rainfall.

Like in Ananthapuram there is also regular failure of monsoons leading to depletion of ground water levels and reduction in yields, which ultimately results in crop failure. Farmers prefer wet crops even when water supply is not adequate, thereby becoming debt ridden by taking loans for digging bores which ultimately don’t yield water. Non-availability of water at appropriate time, use of seeds and pesticides of low quality etc. are main factors for the failure of crops in the recent past.

It is also observed that there has been regular migration of people especially from villages under Aluru, Adoni, Yemmiganur, Pathikonda, Kodumur and Dhone Mandals in the district. The families leave their native villages immediately after Sankranti (Harvest Festival) festival in January and return only towards the end of May in time for the next agricultural season. In those villages around two-thirds of the population mostly small farmers owning five to 10 acres, have deserted their homes leaving the aged people behind. Even children have accompanied their parents.

WDT has been implementing its integrated programs of development covering a total of 291 villages spread across 10 Revenue Mandals of Kurnool district with Pattikonda and Aluru as its area headquarters during the past 5 years. It has been implementing integrated programs of development covering education, women, housing construction, school building construction, water schemes, land developmental interventions in a phased manner.