WDT runs 90-bedded General Hospital located at Kanekal Revenue Mandal. The main departments in this hospital include basic ones viz., General Medicine, Pediatrics, and Gynaecology &Obstetrics. Statistics from the hospitals for the reference year 2014-15:

“I have visited Kanekal, WDT Hospital DOTS Center, and found that this center is doing quality work in microscopy, case identification, issuing of DOTS medication and referral to the necessary PHCs for DOTS and maintenance of records in consistence with Government requirements is extraordinary. I am thoroughly satisfied with the performance of DOTS center of Kanekal WDT Hospital.” Dr U. Krishna Murthy. DTCO. Ananthapuramu district. 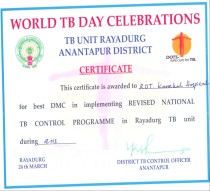 On 27-08-2014, a 25 year old male patient Mareppa, resident of Rangachedu village was brought to the hospital in an unconscious state. He is a known patient of Diabetes on inj. Insulin. He was an old patient of our hospital. After the previous admission he was advised injection Insulin and other medications. But because of ignorance and inability to understand the complexity of disease, he was not following the instructions properly and was not taking his insulin and other medications regularly.

On the morning of 27-08-2014, he developed breathlessness and unconsciousness because of high levels of glucose in blood (a condition called as ‘diabetic coma’) and was brought to our hospital. At the arrival, his clinical condition was very poor. He was in a state of unconsciousness with deep breathing, and grossly dehydrated. His breath was emitting a fruity odor (which will be found in a diabetic coma). He was not responding to even a painful stimulus.

His blood sugar was 534 mg% (normal being 80-120) at the time of presentation. His urine at the time of arrival to the hospital was positive for ketone bodies (which are not present in non diabetic healthy individuals). Patient was treated with IV fluids, Insulin and other appropriate medication. Patient recovered gradually and on 31-08-2014.

Patient was discharged after proper counseling by the hospital team. Necessity for adherence to the treatment was explained and care of feet, eye and other necessary counseling done and sent home.